One of the most significant moves that happened last week was the breakdown in the dollar. As I pointed out in the previous Weekly Report, the dollar had already produced a failed daily cycle the week before and so we should see lower prices ahead. The current daily cycle is only on day 16 and so we shouldn’t be expecting a bottom until late October of early November for this daily cycle. I suspect that by that time we’re going to see a lot lower prices and the dollar index could push down all the way to 90 before we get the next bottom.

The FED will be hiking rates next Wednesday and so we are likely to see some churning around and before that event, but I don’t suspect any big changes to the scenario at hand. I continue to support the scenario I’ve been talking about for the past 6 months and which I discussed in more detail last week.

Partly as a result of the big down week on the dollar, the commodities index CRB had a good up week. We saw some big one day moves in for example copper and natural gas. The media blames these moves on the tariffs but the fact is that the CRB is the advancing phase of its brand new intermediate degree cycle which began on 16th of August and so surprises should come to the upside. I noted out in the September 9th Weekly Report that some commodities had been gathering power for a move above their 10 day moving averages and now that has played out. I suspect that these “surprises” will continue as the intermediate cycle advances.

I’m going to say it again and will keep saying it again and again – the forces that move the markets are cycles and sentiment. The bigger picture is driven by massive fundamentals like the U.S. abusing the reserve currency status of the dollar, but do not be fooled by the news and so called fundamentals you see in the media. Modern markets are the wild west of today and all sorts of things happen but at the end – just like in nature – only cycles and sentiment matter. The same applies for these price pops we saw this week. The cycle in commodities is the advancing phase and so surprises should come to the upside – nothing to do with the tariffs.

Composing over 20% of the CRB, oil also had a good up week with large volatility on Friday. I wasn’t able to find any particular reason such as a news event that could have triggered such volatility. The reason could be anything from an algorithm going haywire to brent hitting exhaustive selling pressure at new highs. Frankly I have no idea. Despite the volatility on Friday, both the WTI and Brent closed the week strong and posed respectable gains. We have a constructive setup at hand and the 100% Year over Year gain discussed in detail in the June 24th Weekly Report is still very much on the table. I believe that we will see breakouts in oil next week which should result into a sustained breakout as we are still very early in the new intermediate cycle.

Gold had a rather dull week as it failed to close above the 10 week moving average and was surpressed down below its 10 day moving average as well by Fridays close. I suspect that we will see more grinding between now and the FOMC meeting on Wednesday. After the meeting gold should start to gain traction to the upside at last. The intermediate picture has not changed and so I expect aggressively higher prices over the next 8 weeks at least.

Unlike gold, silver actually managed to close the week above the 10 day moving average and since the gold to silver ratio has been over 80 – which is considered as a rare and extreme value – I tend to think that silver will be outperforming gold in the next intermediate rally. In the larger picture, I think we have put in the top at the gold silver ratio and so silver is likely to keep generally outperforming gold until the end of this secular gold bull market which should align closely with an opposite extreme in the gold to silver ratio potentially even below 20. 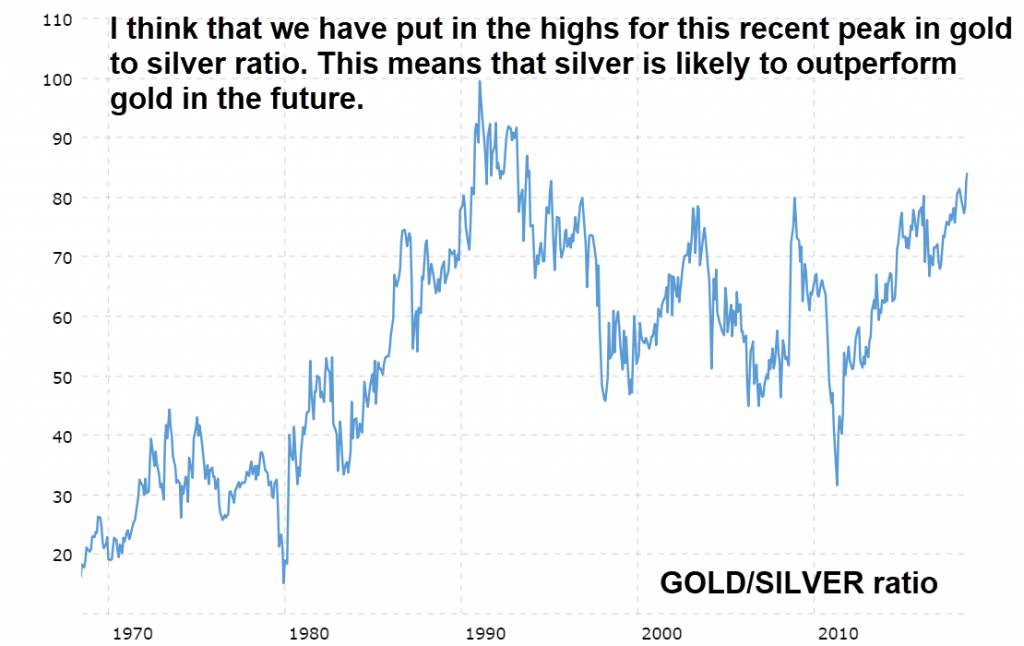 The miners (GDX & GDXJ) also closed the week above their 10 day moving averages and while doing so they also formed solid weekly swings. I also believe that the miners will perform extremely well in the next intermediate advance and it’s not out of the question that we could see GDX tag or even breakout of the resistance level at $25,60. Same targets for GDXJ would be at $42.

The weekly report was pushed out to Sunday as I went on a short trip across the Chinese border to Shenzhen where the internet is… well… limited and censored like in China.