Gold managed to break the July 19th low and thus Friday marked day 54 on the current daily cycle in gold. That’s right around the zone for a daily cycle low and as the intermediate cycle will be on week 35 starting on Monday the DCL will most likely mark an ICL as well. Gold keeps on piling positive divergence on the daily chart and that coupled with the daily cycle count makes a very bullish case for gold. That being said, the weekly chart on gold looks damn right ugly and so I think a safe play would be to wait for a weekly swing before taking direct action. Keep in mind that the further you stretch the rubber band, the further it has to snap back once it does. Once the ICL has been completed, I think we will see a massive short squeeze higher in the precious metals sector. Sentiment is very sour in gold and we are deep in both the daily and the intermediate cycles.

The weekly chart on GDX is not looking pretty either. On a positive note, we finally have the same conditions in place of a major undercut as we had in January 2016. A breakdown would be a sell signal for retail traders and hedge funds and so if we manage an undercut next week there will be lots of liquidity on the market. Our objective is to follow the smart money, which likes to enter and exit into high liquidity breakouts.

The miners have not exhibited any sentiment extremes for a long time. An undercut would surely create brief panic and extreme pessimism. 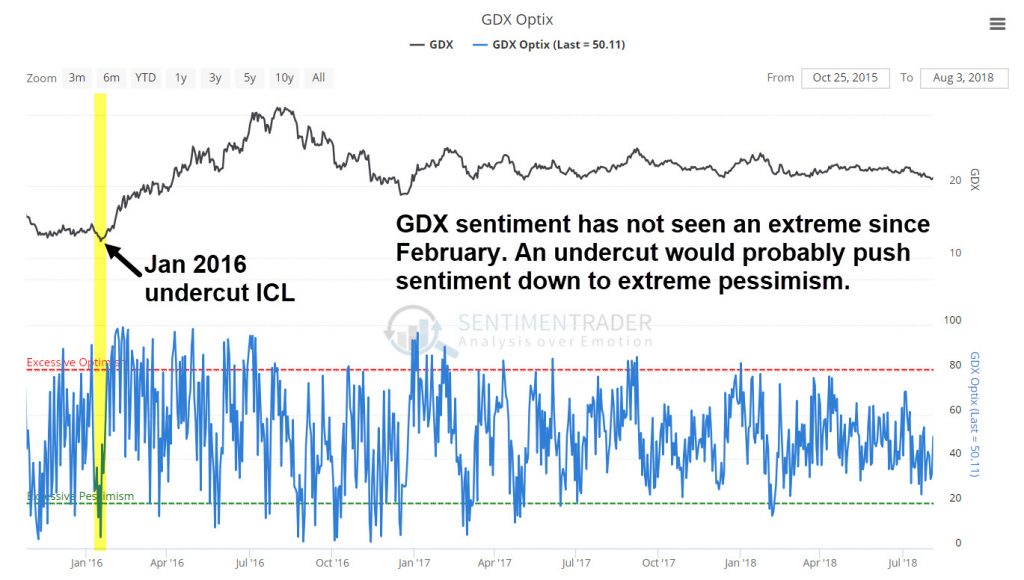 To play it safe, we are still waiting for the currencies to give us some direction as the euro and the dollar have been in a trading range since late May. It’s possible that Friday marked the low for the current daily and the intermediate cycle for gold, but we’ll have to see what the week ahead brings.

As I mentioned in the July 31st Daily Report, it’s all down to the currencies for gold. We need to see downwards pressure from the dollar to make gold shine when measured in dollars. With the intermediate cycle in the dollar being on week 24, the cycle is more than ripe for a larger degree top. I don’t put much weight on cycles in currencies whilst we are in the middle of a currency war, but in order to get back in line with the big picture, I suspect that the dollar is nearing its intermediate top. The dollar index has been battling since late May to get past 95 and the declining 100 week moving average. I’m wondering if the euro is ready to give us an undercut to the June low which would reset the intermediate cycle count to week 1 instead of week 6. This coupled with an undercut in GDX would create a favorable setup for a long trade. If this were to play out, the dollar could make a final push above the 100WMA which would sucker in lots of retail buyers who are without a doubt way too late. 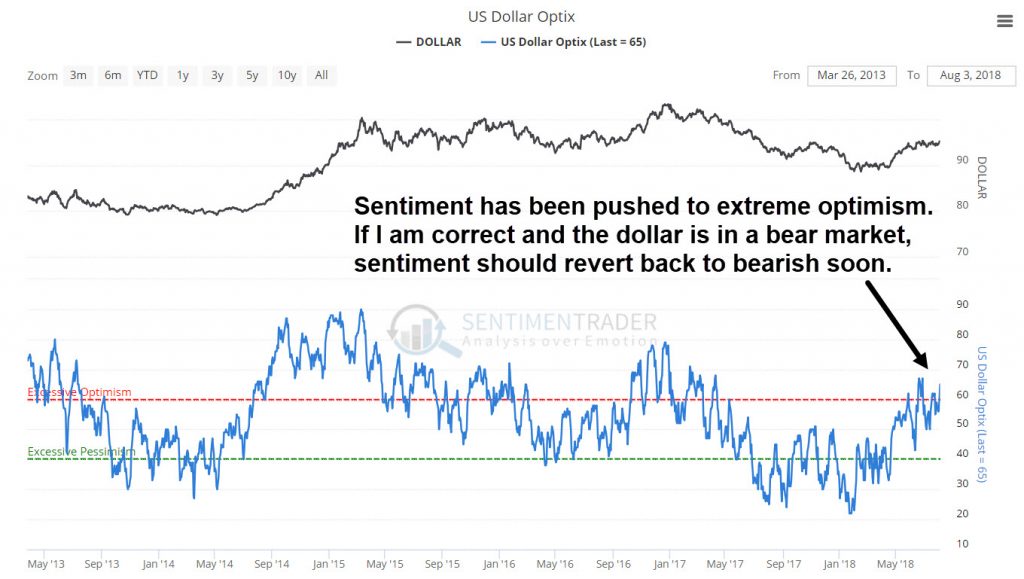 The euro has broken its daily cycle up trendline, the 10DMA is sloping down and we have oversold oscillators. It is certain that we will get at least a DCL and most likely quite soon. I expect that we will either see a DCL or an ICL in the next two weeks. If we do get a breakdown of the June low in the euro, the intermediate cycle will be back on week 39, which is far too late for a sustainable breakdown to occur and so I think that would produce an undercut ICL. I discussed the possibility of an undercut ICL in the euro for the first time a couple of weeks back in the July 21th Weekly Report and so far that seems completely plausible.

Earlier this week, the Chinese central bank or the People’s Bank of China (PBOC) raised the forex reserve requirement from 0% to 20% for Yuan forwards traders (South China Morning Post article on the topic). Noted that this is a relatively soft policy adjustment as it only affects the forwards market, but it does signal that the PBOC would like to control the freefall in Yuan. I don’t expect the policy to have huge impacts, but it does give us some guidance on what the PBOC wants and that is to at least steady the decline. Eventually the Yuan will form a bottom and since the rubber band has been stretched far to the downside, I suspect that we’ll get a V-shaped bottom. Once the Yuan gets grip on some upwards momentum, we’ll know whether the tight correlation between gold and Yuan is here to stay but for now I’m still a bit skeptical on calling for a Yuan gold peg. A peg would be wildly bullish for physical gold and would soon lead to a physical shortage at these prices.

The CRB bounced off from the daily cycle decline trendline and so we don’t have confirmation for a DCL just yet. The bounce painted an ugly candle to the weekly chart and so if we manage to get an undercut in the euro, it is entirely possible to see an undercut in the CRB as well. This could mean that the euro, gold and the CRB would all complete their intermediate cycle lows together. Preferred scenario would be to get the ICLs early next week and a reversal candle by the close on Friday. If all of the three complete ICLs together, they would support each other with upwards momentum for the weeks to come.

I was kind of hoping for oil to have delivered a bigger push down last week as that would have painted a clearer picture on whether or not we have an ICL in place already. We did get a very mild undercut to the July 17th low in oil and the current setup is strikingly similar to the setup in mid June. However, if the euro manages to complete an ICL next week, I think that the odds are high for oil to produce a lower low as well.

As the weekly chart on gold is not constructive at all, and commodities neither the currencies are yet to give us any true guidance what so ever, I’m currently sitting on cash besides my option trades on commodities. My plan is to sit on cash before we have a recognizable ICL or a DCL in the euro. If we do not get the ICL in the euro and so we only get a DCL, I’ll be waiting for a weekly swing on gold to make any direct trades for precious metals.

As for the blog, I’m planning on making an Economic Outlook post in the upcoming weeks, where I’ll discuss Chinas situation, gold fundamentals, trade wars and the next US recession. As in nature, in the markets everything is in balance and so all the markets should move in harmony which makes forecasting different markets easier. Simply put, money flows from one asset to another and the key is to find the asset where big money is getting in position. The next US recession, bear market in stocks and bull market in gold will be amongst topics I’ll address. This will probably be out either next week or the week after that. On a personal note, I have only 3 weeks left before I’ll be moving to Hong Kong for some further finance related studies. Big changes coming in both the markets and my personal life.