Lately we’ve been hearing a lot of bear market & sub $1000 calls for gold. Realistically though, there’s currently nothing that would suggest that gold would be in or entering a bear market. Gold is and will always be the leading component of the precious metals sector. Gold has been making higher yearly lows since 2015, which is a clear sign of an ongoing bull market. We had a clear baby bull rally in early 2016 which supports the hypothesis of a bull market. I find it very hard to believe that any market would top in the first 6 months of a new bull market. For now, gold and the precious metals sector remain in a cyclical bull market which started in December 2015. Gold also remains in a secular bull market which started back in 1999. If we were to get a new yearly low for gold, the situation would be very different. The recent decline in gold is just another yearly cycle low which sole purpose is to generate bearish sentiment and bearish technicals so that the majority of traders are either short or on the sidelines when in fact the yearly cycle lows should be bought hard. YCLs are the best buying opportunities of the year and tend to create the biggest rallies of the year. We are near to one of those situations right now.

Since in cycles analysis our goal is to be contrarian, the latest COT report was very bullish for gold. The blees rating hit full 100 for the first time since December 2015. We can all go back to see what happened to gold over the next 6 months after December 2015. The commercials are basically as short as they were in July 2017 after which gold rallied significantly. 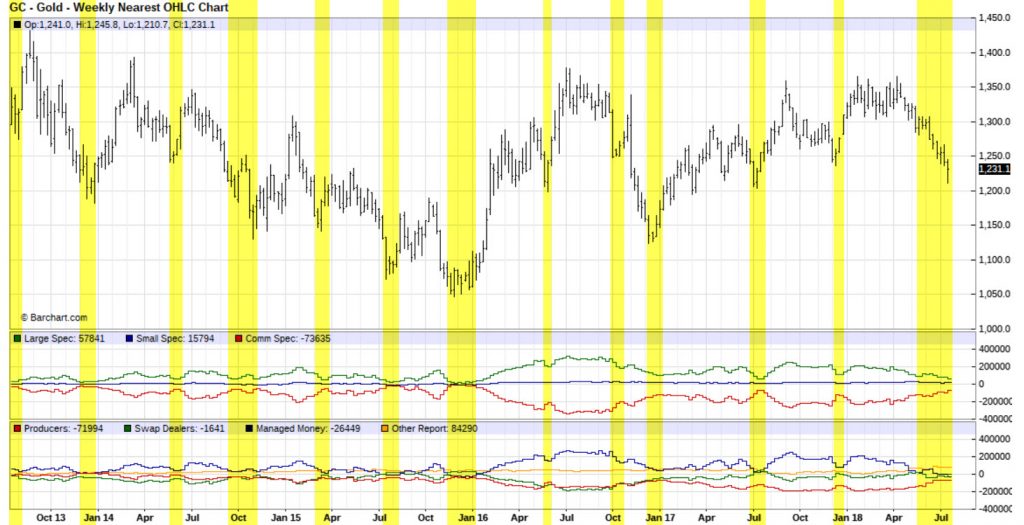 Once the DCL is in we want to see is an explosive short squeeze over the next 6 weeks, after which we want gold to keep pushing higher towards the 2016 highs and above making everyone bullish once again so that we can get another great buying opportunity like we have now. If, however we get a very sluggish move to the upside once the DCL is in place, we have to alter the game plan. I don’t currently think that the second option is something to be too worried about for now due to the extreme lengths of the recent move in gold. Considering all the factors mentioned above, the correct trade for gold is to be long.

I’ve covered the current setup in gold, silver and the miners very extensively over the past month or so in the weekly reports and next week will tell whether we have all the stars aligned for a truly explosive move higher. Either way you look at it, the rubber band has already streathed seriously to the downside and should unload to the upside rather sooner than later.

I mentioned in the July 7th Weekly Report that platinum is a real steal at these prices. This week we got a potential undercut low in platinum which would align with the reversal seen in gold. The current setup for platinum is very bullish from a contrarian perspective.

To top it all, the platinum:gold ratio has stretched very far to the downside and might be ready to revert. Most of the time during the past 20+ years, platinum has traded for a premium to gold. It’s just in the last 4 years that platinum has been trading for a discount to gold.

It could well be that platinum starts to outperform gold during the next intermediate rally. I bought some PL futures last Thursday and placed a break even stop for that trade on Friday.

Like gold, the euro has provided us a daily swing low on Friday. In addition, the euro has closed the week above the 10 day moving average. We also broke the daily cycle up trendline and so the current setup would suggest that we could have completed a daily cycle low in the euro. This would be bullish news for gold.

The current doubt I’m having is that even though the euro did break the cycle up trendline it didn’t close below the trendline which is one thing I look for a DCL. The euro also didn’t reach oversold on the 5 day RSI nor the Stochastics. So, with the current evidence, it’s really just a coin flip whether or not the euro produced a HCL or a DCL on Thursday. Like I said in the previous Weekly Report, the currency cycles are currently a big mess and so next week could deliver us anything. My best guess for now is that the euro produced a daily cycle low on Thursday and should now break out of the trading range of 1,150 to 1,185 during the next week or two. This should also drive the precious metals sector higher.

However, if we only produced a HCL, the euro DCL should be in front of us. This could also mean lower prices for precious metals. It is not completely out of question that the euro ICL could still be infront of us.

If the euro did produce a daily cycle low, that means that the dollar has put in its daily cycle top. With the dollar index continuing to create divergence on the RSI and the Stochastics, it is becoming more and more likely that the dollar is also very close to its intermediate top. It’s also worth mentioning that the COT on dollar told a story of excessively bullish retail. A false breakout (like the one on Thursday) would give smart money an opportunity to exit as retail would be buying the breakout creating liquidity for sellers. So far the dollar rally qualifies as a bear market rally and nothing more.

It is also worth pointing out, that EUR/USD has not confirmed the new high in the dollar index. Euro being the largest component of DX, it could be that the euro has once again started to lead the currency cycles.

For gold and the currencies, we have to take it day by day for now. If we can get a constructive move up in both the euro and gold next week, we can say with near certainty that the ICL in gold has passed and we are in for big gains over the next 6 weeks or so in both gold and the euro.

Stocks have managed to move above the last daily cycle top, which means that the current daily cycle is now right translated. We got slightly above the March highs, but we didn’t close the week that convincingly and the S&P500 formed an ominous weekly doji star.

Once again looking in the bigger picture, the stock market is due for an ICL and should be in the last daily cycle of the larger intermediate cycle. There isn’t much upside left on the table and as I’ve said numerously before, I’m hesitant to short the stocks market during the FED rate hiking cycle so my plan remains to stay on the sidelines for now. The S&P500 is the index I follow in terms of cycles analysis and it is currently showing negative divergence on both the daily and the weekly charts.

This late in the intermediate cycle, I’m not inclined to keep pressing stocks and I’ll rather wait for the next ICL to go long. Right now in my opinion the true opportunity lies in the precious metals sector.