There has been a lot of speculation lately on whether the Chinese government has now pegged the yuan to gold. Judging by short term movements that might seem like the case, however there are some issues which I’d like to address before the actual Weekly Report.

I agree that there are logical reasons for China to peg their currency into gold. Every major central bank in the world own gold and so gold is money even though we are thought otherwise in economics 101. A peg would create massive currency inflows into China boosting their economy, which is probably in way worse shape than what the Chinese are claiming. China could then demand for other countries to pay China in gold rather than dollars as in reality China really hates the current dollar standard and has been seeking for ways out of it for year creating one on one trade deals with major trading partners like Russia. The main question remains whether or not this is the right time for such a move.

One of the thesis people use when saying that gold has been pegged to yuan is that the gold yuan cross rate has been trading in a tight range for the past weeks. This is very much true however gold is experiencing the same volatility collapse in most of the major currencies and the bollinger band width which measures volatility has been contracting in other cross rates as well. It is notable that XAU/CNY has been holding up well whilst other cross rates have been falling hard and so the correlation between gold and yuan has been significant in the past few weeks. We should see a major change in volatility conditions for all of the cross rates and if XAU/CNY holds at current levels for the months ahead, we can say that something has truly changed in the fundamentals of the gold market. For me it seems a bit too early to call for a new gold standard as that would bring some major changes to the whole world’s economy as I’ll explain later.

Volatility has been low for the past weeks in all the major gold cross rates.

No one should argue against clear facts and so I must say that gold and yuan have been highly correlated lately. Yuan and gold are both showing double divergence on the daily charts.

Suppose that the Chinese government has really fixed yuan to gold. That kind of a major play would surely attract a lot of global interest towards the Chinese policy as Yuan would become practically the same as gold – a form of real money. That would also suggest that the Chinese are not pleased with the dollarized world (which is true, but you won’t see that on the mainstream news) which would create buying pressure for safe haven assets like gold which would soar massively in a short period of time. Yuan being pegged to gold, yuan would also soar creating deflation which in a form of a 20%, 30% or 40% spike in a short period of time would guarantee a recession. On the brighter side, China has a major problem with currency outflows as wealthy Chinese investors seek ways to take money out of China. A gold peg would ease the anxiety of Chinese investors. However, I’m not fully convinced that China is willing to make such a drastic move yet. They’d need to be holding massive gold reserves to support a gold standard. I’m not saying that the Chinese do not have such reserves as China is not transparent at all in its gold reserve figures, but we can’t say for sure. I do agree that we will probably see a gold standard during my lifetime, but we just don’t have enough evidence yet.

My two cents on this subject is that China is just devaluing yuan to mitigate the effects of the tariffs. We will probably see a change in the volatility conditions in the precious metals market and I suspect that that change will be to the upside in gold. I’d also be as happy with China announcing for a new gold standard but for now that seems too early to call.

Gold should produce a V-shaped bottom soon and rally quickly to $1350 zone in order to keep the bull market alive and well. Otherwise we may see a turn for the worse in the longer term cyclical point of view which is still majorly bullish at least until the next 8 year cycle low due in 2023ish. You can check out my earlier Weekly Reports for a more in-depth analysis on the situation on gold.

As of Fridays close it seems that the whole commodity complex has likely completed its summer ICL and is now ready to move higher over the next 6 weeks at least. Both copper and the CRB index have completed a weekly swing low and have the conditions needed for an ICL to occur. 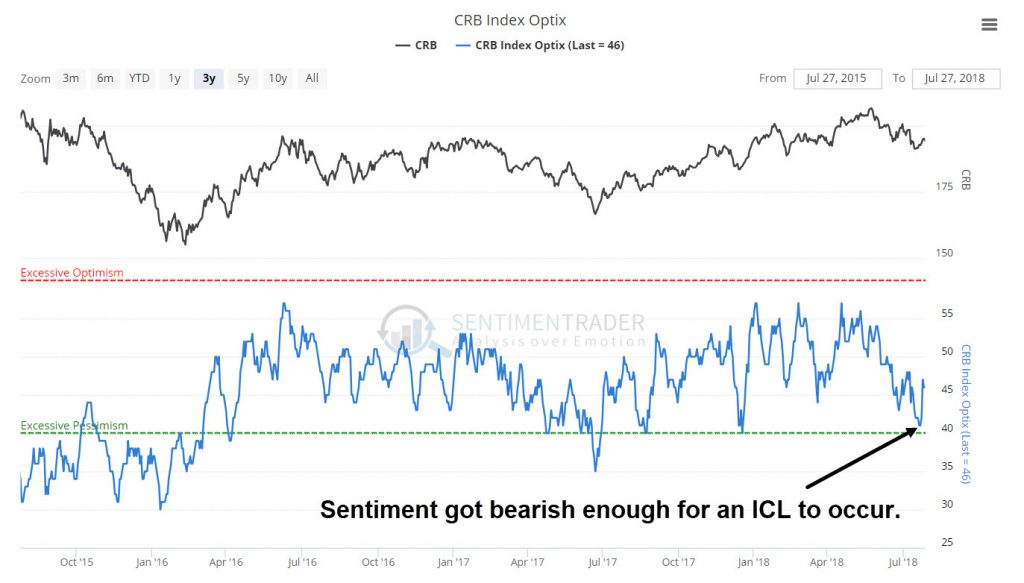 The cycle count on oil is a bit fuzzy. Oil accounts for over 20% of the CRB and so most of the time CRB just follows oil but since other commodities are acting like they have finished an ICL, I suspect that oil has also put in an intermediate degree bottom and is now ready to rally. Oil had a massive run from the 2017 yearly cycle low in June and is still rather close to its highs. This means that we still have a shot for the 100% YoY gain in oil which would then trigger a recession in the US. This could align with China dropping a bomb like publicly announcing a yuan gold peg. For more on oils correlation with US recessions see June 24th Weekly Report.

Perfectly normal behavior… for a bubble.

The ICL in CRB should give gold some tailwind but we need to see some progress in the euro as well.

As I noted in the previous Weekly Report, that the euro did break the daily cycle trendline intraday but it didn’t close below the trendline which is quite the minimum for a DCL. We also did not reach oversold levels in either the 5 day RSI or the daily stochastics and so we had very flimsy proof for a DCL. As it turns out, we closed the week in red for the euro and so I think we may get a more recognizable DCL next week after which “reduced tensions on tariffs” will start to drive the euro higher for weeks ahead. This of course is complete nonsense and the real reason for that rally would be that the euro has been seriously oversold for months and being in what I believe is a bull market, the euro should continue higher eventually.

I’d be willing to buy into a recognizable DCL in the euro next week, on or after the FOMC meeting on Wednesday. We might even create an undercut low of the May low which would also likely drive gold below its recent low at $1211 on XAU/USD. This would mean that gold and euro would find their intermediate cycle lows together and could finally start moving up like they should in a bull market.

As I think that the euro is still in a bull market, the dollar will probably complete its YCL later this year. This should correspond with gold rising higher towards and possibly over the 2016 highs.

Summa summarum, next week should tell whether the commodities are finished with their ICLs. If we can get a recognizable DCL or even an ICL in the euro, we should see exhaustion in selling pressure for both the euro and gold, after which I think we off to the races with gold. If oil manages to rally above the recent high at approx. $75, we have a shot for 100% YoY gains which should push the US economy into a recession.