If you were a trader with deep pockets, how would you enter massive positions on a rather illiquid market like precious metals? Simple, dump a lot of futures contracts in matter of minutes to flush stops, manufacture false swing lows on the charts and run those swing traders the next day and produce an undercut to run more stops. Everyone single of those has happened to gold in the past month. We got a massive 12 000 contract dump in 30 minutes in premarket a few weeks back, we got a false swing low last week followed by a bullish weekly reversal candle and we got an undercut on Friday. All of those events flush stops and drain mental capital from the market which allows big players to enter massive positions ahead of a big move.

This however is not a bad thing as long as one can keep cool and focus on the bigger picture. I believe gold, silver and the mining stocks will all deliver very powerful rallies once the bottom is in and I think that we’ll also break the 2016 highs on each of the sub sector. If this is the case, we’ll finally break out of this 2 year long basing pattern we’ve been stuck in in the precious metals sector. This sector has once again been drained from bulls and the bear are back in town. This is exactly when a contrarian trader should be wide awake. Periods of difficult trading are often followed by periods of easier trading. I think we are about to transition into a easier period once the ICL is in.

In addition, we have significant support from the seasonality of gold. Gold has a strong tendency to rise towards year end, not fall. There is no reason to think that this summer will be any different. Below is 30 years worth of seasonality data.

On the shorter time frame, we got an undercut low in gold and silver on Friday and if we get a swing low early next week, the odds are high that we produced an ICL with that undercut. Gold is on day 39 on the daily cycle count, which is mature enough to produce a daily cycle low. This deep in the intermediate cycle, that should also signal an intermediate low.

The bottom should be in any day now. I think that we will see a truly massive move in this sector later this year. The only analysts bullish on gold seem to be the cycles analysts, which is exactly what we should see at these major turning points. We’re starting to see calls for sub 1 000 dollar gold, which has been more of a rule during ICLs in gold for the past 5 years. Of course, this has never realized. Gold transitioned into a bull market back in December 2015 and nothing has changed in the big picture.

The currencies have become a complete mess since every central bank is trying to devalue their currencies to negate the impacts of tariffs. I’ve been saying that euro should start outperforming the dollar soon and every time I take a step back and look at the big picture I come to the same conclusion which is euro up dollar down. The dollar remains in a secular bear market and has entered a cyclical bear market as well. There is just nothing that would suggest otherwise.

On the shorter timeframe, the dollar is still signaling negative divergence on the oscillators and has produced a lower low. I suspect that the low on Monday was a half cycle low and that we will probably produce a daily swing high in the dollar early next week and continue to lower lows later next week. This would align with gold producing a swing low as well.

It’s still unclear whether or not oil is going to produce the 100% year over year rally this year. I suspect that we will see a 100% YoY gain sometime this year, but if that won’t happen I believe it will happen next year. As i explained in the June 24th Weekly Report a 100% rise in oil in a year or less, has led to recessions in the US since the 70s. This coupled with an inverted yield curve, we have all the pieces in place for a recession which could drive gold prices much much higher.

This week’s weekly report was posted this late since I was paddling the whole weekend in kayaks at the Finnish archipelago sea near Hanko. The weather was truly amazing, and we saw lots of very unique islands and some fortresses from the 1940s reminding us how lucky we are to live in peace. 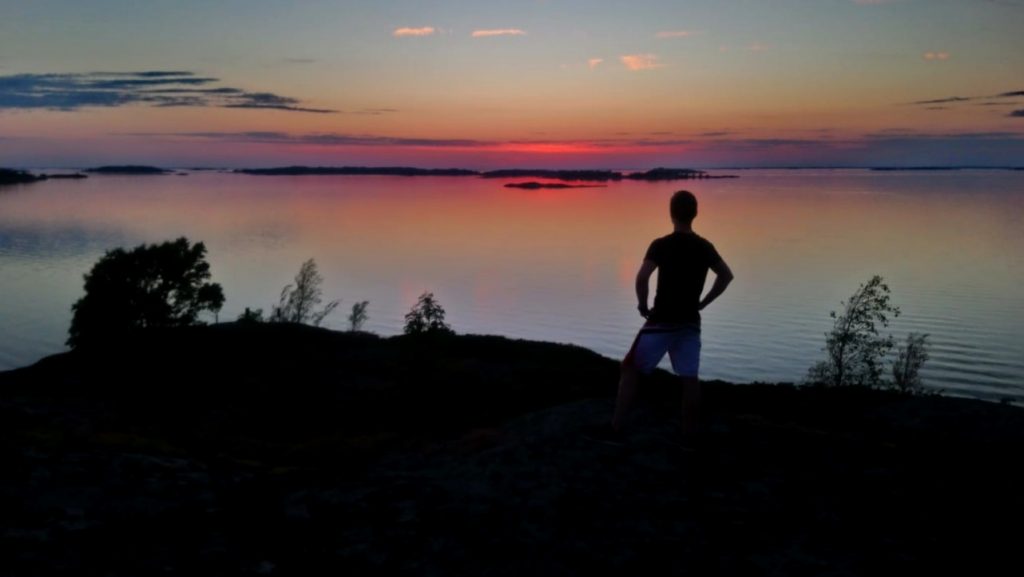