As I mentioned in the previous Weekly Report, the precious metals sector is one of the most manipulated sectors there is. We saw a prime example of this on Friday. First the banksters manufactured a fake breakout on Thursday to get retail excited and buying so that the banks could get into short positions after which they slammed the market. Gold signaled a failed daily cycle by breaking the May low so now we should see gold dropping into a DCL in the next week or two. 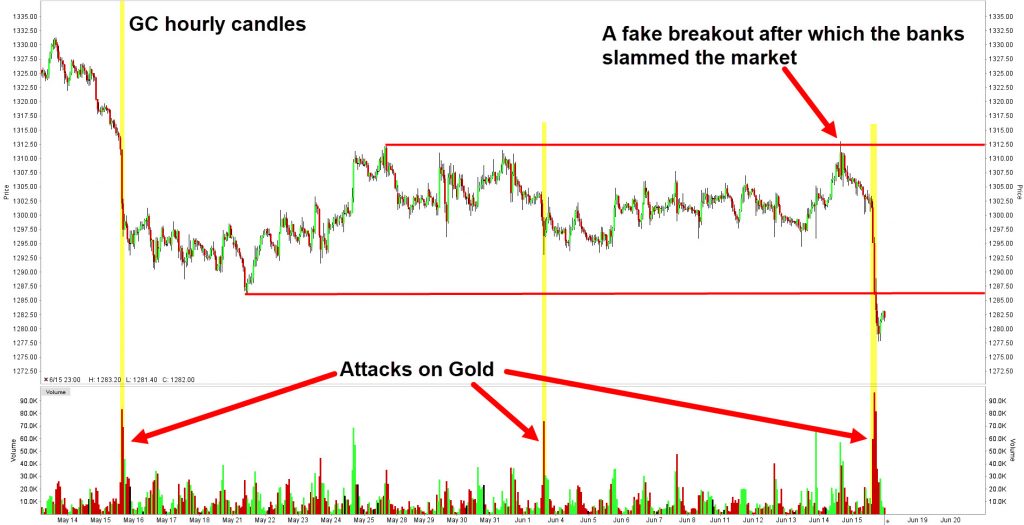 Once the banksters managed to break the May low in Gold, the market got flooded with sell orders just like the banks wanted in order to create panic and scoop up shares and contract form retail traders. This is how you can get big buy and sell orders executed – by triggering a lot of stops. The same thing happened with silver which looked like it was ready to break out of the large triangle it has been stuck in for months. 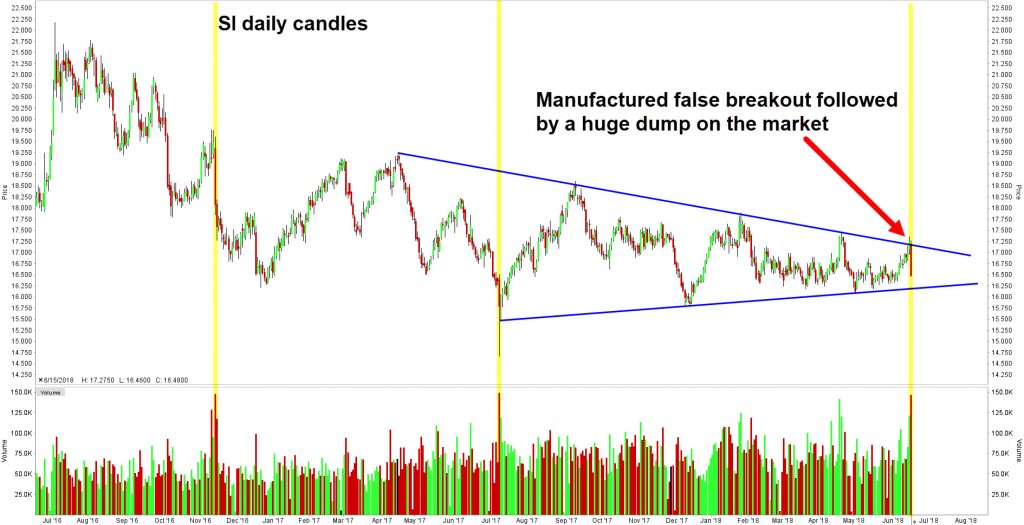 This however can be seen as a good thing. Silver continues in the coil pattern gathering even more power once it breaks out. The miners will be forming their ICL at the same with gold, which has been almost a rule in the past. And the whole sector is in for some true fear in the next week or two. Fear generates the best buying opportunities as we can see from the SentimenTrader Optix indicators.

Generally speaking, golds intermediate cycles have been stretching in the past three years and some cycles analysts are currently fearing that a short cycle will follow this current cycle as it seems stretched in their eyes. I’m however wondering if these longer cycles have become the new norm on the sector.

For these reasons I would stay on the sidelines for now and wait for a daily swing to form in gold. Once we get a daily swing, I would push the pedal to the metal. After all, since when has an ICL look like a buying opportunity in real time?

What we want to see in the next two weeks is a failed daily cycle in the miners, extreme pessimism across the board in precious metals, a 3-8 day bloodbath phase in either gold or the miners and finally a daily swing which will serve as the best buying opportunity of 2018.

After the FOMC meeting on Wednesday, the scenario where the euro would have dropped into a HCL and then continued back up with its intermediate advance, was alive and well, but after the ECBs “End of QE” announcement, the dollar rallied enough to signal a right translated cycle. This opened up the possibility of an inverse head and shoulder bottom for the euro.

I’ll say this again; the bigger picture has not changed. The euro started a bull market in 2017 and we are overdue for an ICL in the euro. A quick point to note out is what happened to the dollar once the FED ended their QE program.

In this business, adapt or die mentality is the only way to face these setbacks. If one is unable to adapt, they’ll surely destroy their portfolio over time. Know when to scale out. If the trade turns back in favor, bite the bullet and scale back in.

Stocks did exactly as one should expect before an FOMC meeting and rallied close to new highs with the Nasdaq breaking to new all time highs. Now we should see stocks dropping into their natural DCL in the next week or two. In order to complete a full DCL, the S&P500 needs to break the daily cycle up trendline.

In the next four to six weeks we SHOULD see a normal decline to an ICL. However, the Semiconductors are about to break out to new all time highs soon which means no resistance above. This could result into a big rally with only minor corrections.

So I would not play this decline to the next DCL on the short side since we have been consolidating since February and as I have pointed out before, harder market are often followed by easier markets. If we do get a normal decline to an ICL in the weeks ahead, I would use this to get long stocks. The stock market will not be making a significant decline during the rate hike cycle as that would look like the FED is tightening into weakness so it’s just easier not to try and short the stock market. It’s easier for the FED to prop up the stock market now and then in order to keep small investors happy, spending and rotating the economy. This is of course the exact opposite manipulation compared to what we have to endure in the precious metals.

In the end, investing and trading is about patience. Waiting for the right setup to form and then pulling the trigger. In the meanwhile, protect capital. I had good gains with the silver December calls on Thursday and then watched those gains erode in an hour or so. I had proper hedging in place and I ended the week about the same as I started on Monday. Now I’m on the sidelines waiting for gold and the euro to finish their ICLs together after which it’s showtime for the metals.

I’ve been busy this week with work and so I’ll probably publish the article about sentiment probably later this weekend.